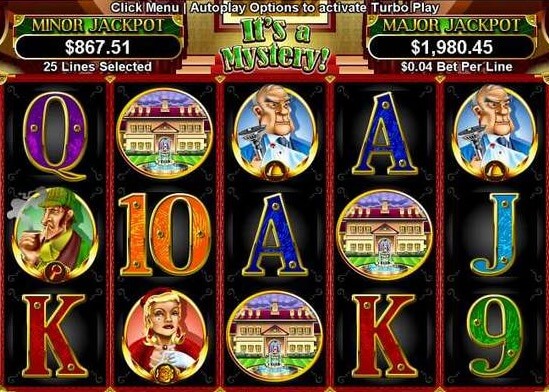 It’s a Mystery is an online video slot game that follows a charming theme about the combined adventures of Sherlock Holmes and Hercule Poirot from their famous detective novels. The game comes boasting 5 reels, 25 paylines and a wide range of bonus features.

There is however, no mystery in the fact that the bonus features in this game provide far higher winning opportunities, with wilds, 2 random jackpots, free spins, a feature guarantee and more. Players can access this game from a number of online casinos and try their luck at the 37 500.00 top jackpot prize.

It’s a Mystery slot has been designed to tastefully incorporate an enjoyable theme, top quality graphics and action-packed gameplay into one game. This can be seen in the consistency shown throughout, from the mysterious soundtrack to the question mark on the wild symbol.

The wild symbol can essentially bring a player more than a question mark, with 5 awarding a prize of 7500 coins. Another symbol to keep an eye out for is the It’s a Mystery logo scatter symbol, as 3 activates the bonus but 5 landing anywhere on the reels can bring in a prize of as much as 25 000 coins.

It’s a Mystery slot game comes with multiple bonus games, and one of the most engaging is the Portrait Puzzle bonus feature. This game is presented to players in the form of a puzzle on their screen, the moment they enter the game.

The aim is to collect as many pieces as possible, as the more a player collects, the more they will be rewarded. Once a player has collected all the pieces of the puzzle, they will be awarded with a whopping 50 free spins as well as a 6x multiplier.

Something of a generous addition to the already present bonuses, the It’s a Mystery feature guarantee ensures that every player, regardless of their stake, has entry to the bonus game.

Essentially, this means that the developers have agreed to aid any player that cannot activate the bonus feature within 150 spins.

The Win-Win bonus feature found in the base game of the It’s a Mystery slot is a fairly new addition, and in fact is only ever offered by Real Time Gaming. This feature essentially secures a players innings during the free spins bonus rounds.

Thus, should a player receive a number of free spins and not reach a win that exceeds 10 triggering bets, then the feature will actually award the player with a consolation prize worth 100 times their triggering bet.

Once a player has become familiar with the It’s a Mystery slot interface and action controls, and have subsequently selected a coin value between 0.01 and 5.00, it is undoubtedly time to start playing. It is also important to remember that the higher the bet, the bigger the prize.

As previously mentioned, players could bring home the top prize of 37 500 if they play with the maximum total bet, while the 2nd highest payout is 12 500. The progressive jackpot is awarded at random, meaning a player has nothing to worry about but enjoying the game.